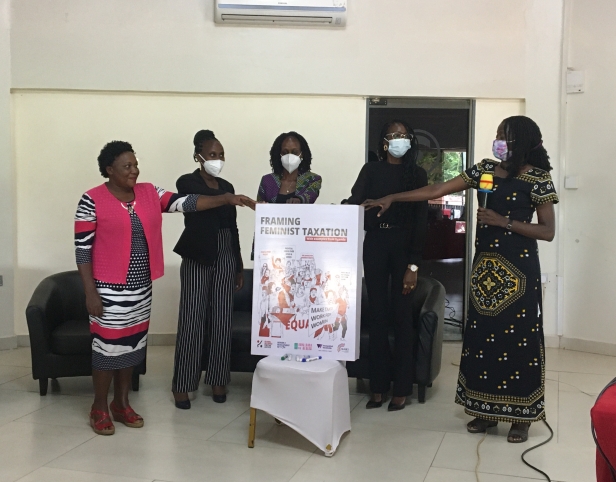 Akina Mama wa Afrika (AMwA), with support from Friedrich Ebert Stiftung (FES), launched the Feminist Taxation Framework Guide titled “Framing Feminist Taxation: Make Taxes Work for Women”.  The launch sought to deepen reflections on the current tax system with a view to reimagine, shape and advance bold alternatives for a progressive tax system; to amplify women and feminists’ agency and voice for progressive tax systems in Uganda and across the continent; and, to build solidarity within and across government agencies, civil society and the private sector for tax justice and gender equality. The Guide takes examples from Uganda and demonstrates how to link a global advocacy issue to a national framework in a way that is relevant and pertinent to influencing both national and global spaces, delivering guidance and recommendations for policy-making and advocacy that can effectively change our current economic systems for a feminist future. It provides tools to assess the gender bias in the current tax system and illustrates how to advocate towards a feminist tax framework that upholds human rights and enables substantive gender equality. The event was held on 26th November, 2021 which was the Global Day of Action on Tax justice for Women’s Rights.

Welcome remarks were delivered by the moderator, Isabella Akiteng, followed by opening remarks by Leah Eryenyu (Head of Programmes – AMwA). Eryenyu highlighted the importance of adopting feminist alternatives to current economic structures, noting that the economic development structures are rooted in neoliberal ideology, while the present realities call for market-based solutions to social problems. She spoke about the objective of the Feminist Taxation Framework Guide which seeks to propose a new way forward for taxes that affect everyone differently depending on class, gender, position in society. Furthermore, she brought attention to the fact that while tax policies are supposedly neutral, human circumstances are not, because under current inequitable policies and disparities in collection approaches, the one with less ends up paying disproportionately more. She explained that women – who are more likely  to be unemployed, underpaid, or to spend money on consumption to support their families – consequently end up being affected harder by these fiscal policies. 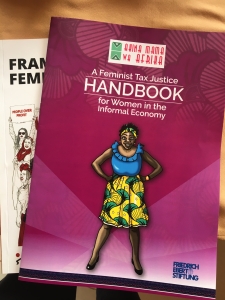 The keynote address was delivered thereafter by Caroline Othim – Global Policy Advocacy and Campaigns Coordinator (Global Alliance for Tax Justice) who reiterated the Guide’s purpose of underpinning key policy issues to determine whether a country’s tax system is feminist. She emphasized that the Guide is also intended to help lobby policymakers reform tax at domestic levels as well as internationally by lobbying the IMF, UN, and other multilaterals to seal loopholes on a global level. Othim concluded that the COVID-19 pandemic has triggered socioeconomic crises and necessitated creation of global financial systems that engender justice, hence the urgent need for governments to develop progressive approaches to economic recovery and tax.

The Guide was then presented by Faith Lumonya, the Programme Officer – Economic Justice and Climate Action at AMwA. Lumonya began by stating that the Guide challenges stakeholders to recognize that tax injustices exist because of unfair power dynamics at their roots. Lumonya acknowledged the history of systemic weaknesses creating opportunities for businesses and individuals to exploit. Large multinationals often invoke double-taxation treaties to avoid paying dues. She mentioned that this was further illustrated when Uganda started negotiating trade agreements with the European Union (EU), one of the terms the EU insisted on was for the Government of Uganda (GoU) to remove up to 80% of export tax on commodities leaving the country. Lumonya called for the reduction of the tax burden on women by adopting progressive, redistributive and gender equitable taxation, including new forms of taxation of capital and wealth combined with less reliance on consumption taxes. She also proposed the renegotiation of the Uganda-Netherlands Double-Tax Agreement (DTA) underpinned by an African feminist taxation position paper and, to repeal corporate exemptions.

The presentation was followed by a panel comprising Maria Alesi (Feminist and Development Practitioner), Rosemary Namono – Co-ordinator, Platform for Vendors Uganda (PLAVU), and Cynthia Butele – Legal, Uganda Revenue Authority (URA). Alesi opened with the exhortation that the conversation of inclusive tax systems is important because taxes are one of the most reliable forms of resource mobilizations that can be used to improve the lives of citizens, and that the state carries the mandate to cater to this. She emphasized that taxes for development must be collected in a way that does not compromise the wellbeing of certain segments of society. Namono shared about taxation from the perspective of women working in the informal sector, and brought along representation in the form of those who bear the biggest brunt, that is market vendors and small businesswomen. She noted that vendors pay direct and indirect taxes – URA taxes, market dues, and KCCA license fees, reminding the participants that many of those who slept in the market during Uganda’s COVID-19 lockdown were women, who make up the bulk of the informal economy and tend to be the primary financial supporters of their families. In tax review, therefore, Namono called for the experiences of all women to be taken into account. She then invited Eleanor Nalunga, a vendor from Wakiso, to speak. Nalunga expounded on the ripple effect of unfair taxes and how the final consumer carries the heaviest burden as heavy taxation inflates the prices of goods and services. She also mentioned the exclusion of informal workers in tax reform consultations as contributing to their lack of faith in tax systems. While closing, Butele maintained that the URA is simply an implementer of the law. Debt collectors, doing their jobs, recover money from people – who unfortunately are already struggling. In Butele’s explanation, current policies as they are upheld by the URA are income-driven rather than gender-based and are therefore not intentionally discriminatory.

During plenary, participants raised concerns, such as accessibility justice. Questions whether e-tax systems are truly available to all, including those in rural areas, and the reliance on digital systems with no alternatives which leaves those without the technological knowledge at higher risk of noncompliance and the resulting punitive consequences.

Closing remarks were delivered by Susan Nakagolo (Principal Economist – Ministry of Finance, Planning and Economic Development) who admitted that she had never viewed taxation as a feminist issue, and that the submissions from the panel had convinced her that, indeed, a feminist lens needed to be integrated in tax reform and policy formulation.