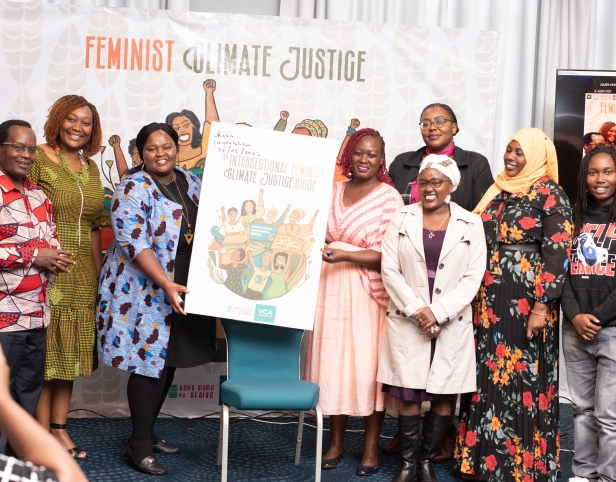 The Intersectional Feminist Climate Action Guide is an advocacy and programming tool for civil society, women, feminists, environmentalists, and minoritized groups who take on a central role as creators, facilitators and advocates of innovative climate solutions through an inclusive and rights-based approach. It provides a framework for how these groups of people can integrate intersectional feminist approaches in gender and climate justice work. The guide calls for centering the most marginalized and for the re-imagination of the usual gender mainstreaming strategies in climate action by placing emphasis on building the socioeconomic, cultural, and political agency of women and other minoritized groups of people in climate justice advocacy. It further emphasizes the need to address the power dynamics and structures that influence the pace of change and levels of existing insecurities, the distribution of resources and a host of benefits on current and future outcomes. The guide adopts an intersectional feminist frame of analysis of the current actions of climate movements, analyzes different laws, policies and systems essential to guaranteeing this change, and focuses on analyzing specifically the realities of the climate crisis in the Global South.

“This guide is quite timely as it comes at a time when governments around the World, and especially in Africa, are preparing for COP 27, which will take place in Sharm El Sheikh, Egypt. As we celebrate the fact that COP 27 will be hosted on the continent, it is also an important time to reflect on the hard truths that are often swept under the carpet. As a continent in the Global South, Africa contributes the least to the climate crisis. The continent as a whole is responsible for less than 4 percent of the global carbon emissions, and yet African women, girls, indigenous peoples, people with disability, gender expansive persons, and other historically minoritized groups of people continue to bear the brunt of this climate crisis, while at the same time minting solutions to sustainably solve a problem that they didn’t create. This is why climate action must foreground feminist intersectional climate justice.” highlighted Eunice Musiime, the Executive Director of Akina Mama wa Afrika and one of the authors of the publication.

She continued:  “Instead of calling for climate funding that so far has mostly consisted of loans, with less than 10 percent of committed funding targeting developing countries reaching local communities, African Governments should, along with governments of other Global South states call for more flexible climate financing, less loan financing, and more climate reparations, especially in the face of the rising non-economic losses and damages that communities are experiencing.”

Mendi Njonjo, the Director, Hivos East Africa, who officiated the opening ceremony for the Launch of this Guide, noted that while women and indigenous peoples in Africa and the Global South have played and continue to play a critical role of protecting the planet through their traditional knowledge, skills and resources, and environmentally sustainable actions to adapt to and mitigate against the climate crisis as custodians and caregivers in defending biodiversity and acting for climate justice, they seldom make it to decision making spaces where solutions are ultimately crafted. This dynamic results in climate change solutions that are not attuned to the lived realities of the people who are most affected. The intersectional feminist climate action guide is a groundbreaking document because it seeks to bridge this gap by providing the kind of direction that is urgently needed to advance just and inclusive climate action efforts. The guide provides practical ways for centering the voices and, therefore, the needs of those at the margins in climate decision-making and action; and illuminates existing locally-led climate solutions whose advancement will require that we seek to confront and directly address the unfair power structure that exists between men and women (in all their diversities), the rich and the poor, the Global North and Global South. These power structures, which are facilitated by systems like neoliberalism, neo-colonialism and colonialism, racism, patriarchy, and capitalism are the bedrock of the climate crisis.

Ikal Angelei, the Director of Friends of Lake Turkana, a grassroots indigenous organization in Kenya, described the guide as a critical tool because it makes the bold step of interrogating some of the climate solutions being advanced at local, regional and global levels, and examines their impact on women, girls, indigenous peoples, gender expansive persons, and other minoritized groups of people, noted. 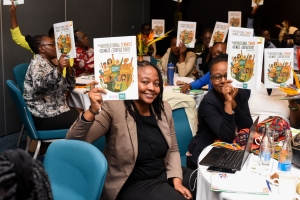 She continues: “Solutions such as the transition to renewable energy comes at a heavy cost for Africa’s mineral rich states, whose populations face the risk of continued extraction and exploitation as the world seeks minerals like copper, cobalt, nickel, rare earths, lithium and silver to service renewable energy industries. While this is being advanced as a solution to curb the use of fossil fuels, the burden of a heavy mining industry would only work to exacerbate problems like land grabbing, deforestation of natural forests, and destruction of natural resources and ecosystem disruption. The guide in this regard challenges both state and non-state actors engaged in climate action to think critically about the urgent need to adopt feminist intersectional responses to solve current problems and advance de-colonial, anti-capitalist, just and inclusive solutions.”

Faith Kasiva, the Secretary, State Department for Gender at the Ministry of Public Service and Gender, Senior Citizens Affairs & Special Programmes of the Republic of Kenya, commended AMwA for developing the guide, which she described as a critical resource noting that gender-differentiated impacts of climate change must indeed be given the necessary attention if we are to address the climate crisis effectively, in a just and inclusive way.

Inside the Guide: Why, What and Who

The guide unpacks the social and structural dimensions of the climate crisis and presents the case for why it is important to adopt feminist intersectional and gender transformative approaches to climate action. It highlights what we perceive to be the root causes of the climate crisis and the resultant cross-sectoral, gendered and social inequalities with examples from different countries in Africa. The guide further highlights key processes on which feminist organizations, women’s rights organizations, and civil society groups can engage to advance gender-responsive and feminist intersectional climate justice approaches for a just and inclusive climate transition. The guide also presents successful approaches in ensuring gender responsiveness in climate policy-making and programming to mitigate, from an African perspective, the gendered, racialized, and classed impacts of climate change and climate action.