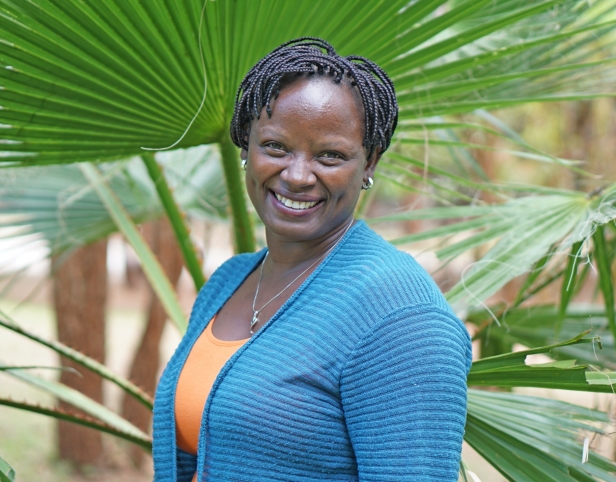 Having grown up in Bukoba rural district in Kagera region bordering Uganda, Lydia Wilbard is the current National Director at the Campaign for Female Education (CAMFED) in Tanzania. She is also a founding member of the Visionary Women Savings and Credit Cooperative Society (SACCOS) and a Vice Chairperson of the Tanzania Education Network – TenMet. Lydia attended the African Women’s Leadership Institute (AWLI) a decade ago in 2008. We caught up with her in a conversation about her leadership journey before, during and after 2008.

I like calling myself a rural woman because that is where my story begins. I lost my mother at a young age and as is the norm in most African societies, I was raised by my maternal aunt. This was the first of my transitions because I had to move to a whole new environment but with the same patriarchal tendencies, at a tender age. The only girl in a home of seven male children, the burden of care and domestic work fell on me and even at that age, I had a feminist awareness of the injustice that comes with gendered roles. While I had to cook, plough, fetch water and even take care of grown-ups, patriarchy dictated that the boys could not have any of this and as a result, I was always late to school where I was expected to perform at the same level, or even better than my male counterparts otherwise there was no future for me. Once, I was hospitalized because my back could no longer bear the brunt of my workload. It is on this trajectory that I knew I had to work extremely hard and grasp every opportunity that came my way – including the AWLI, to better myself and be able to compete favourably with the men who were way ahead of me.

It is on this trajectory that I knew I had to work extremely hard and grasp every opportunity that came my way – including the AWLI, to better myself and be able to compete favourably with the men who were way ahead of me.

Today, I can testify to the power of education to transform the lives of women and girls. I am a registered Nurse and a Public Health Specialist with a Master’s Degree in Public Health from John Hopkins University , and have gone ahead to use this knowledge to ensure that the health conditions of women and girls in my area are improved through awareness raising efforts and advocating for women’s greater access to health services. As a volunteer in Iringa where the prevalence of HIV/AIDS was high in the late 2000s, I joined the Student Partnership Worldwide – SPW, an organization which used debates and competitions to educate young people and communities about sexuality and Sexual and Reproductive Health Rights in general. This gave rise to the work that I do with CAMFED which I joined after being nominated by one of my colleagues. Look at the strength of networks!

CAMFED is an international organization that supports girls’ education with a vision of a world in which every child is educated, protected, respected and valued, and grows up to turn the tide of poverty. To reach that vision, CAMFED believes in multiplying education opportunities for girls and empowering them to become change leaders and makers in their societies. In partnership with the community and government, we work with girls from vulnerable communities as stipulated by the government including: orphaned girls, girls with disabilities and girls from child headed homes to meet their school going costs, offer mentorship and skills training and psycho-social support. We have also created parent support groups to champion education for girls and support where CAMFED cannot for example meeting the emotional and safeguarding needs of girls and young women.

Two years into CAMFED, I attended the African Women’s Leadership Institute to strengthen my leadership abilities as a women and girls’ rights activist. The AWLI that year was held under the theme Democratizing Democracy Using Feminist Theory and to be honest, learning new concepts and unlearning misconceptions that I had known my whole life was challenging. I understood what feminism entails and immediately proclaimed myself one, although people still call me a gender activist today. I was angered by the inequalities women have had to endure because of oppressive systems. I cried listening to the lived experiences of women at the training and their struggles with various transitions in all things loss, sickness, money and living with disabilities. It was a time for me to reflect on my story and never let it hold me back but use it as a stepping stone to continue fighting for the rights of women and girls in Africa.

Learning new concepts and unlearning misconceptions that I had known my whole life was challenging.

Ten years down the road, I now look at things differently, with a feminist lens, examining the structural reasons behind why things are the way they are. CAMFED is that place I have had to practice feminist theory for example by making sure that our programming is from gendered perspective and emphasizes putting women at the centre and advocacy to get into leadership spaces. I have learned to give women the credit for the work they do where they would otherwise have been erased. To let them know that is not a crime for them to raise their hands before anyone else. I use the same principles in boosting our alumnae network (CAMA) of over 22, 000 young women whom we work with to turn the tide of poverty for women and girls in Tanzania and to reach out to fellow girls and change women narrative in their communities having grown their leadership abilities and secured platforms where they can practice their leadership and opportunities for activism, philanthropy, and entrepreneurship. CAMA is now leading the next generation of girls through school, ensuring their safer transition from school and dismantling undesirable norms like child marriage.

One of my other significant achievements after the training is that in 2016, together with fellow women, we started a savings and credit group for women in my circles recognizing that for so long, women have been left off the table because they have no money and yet whoever has money sets the agenda. We wanted to end the culture of women being intimidated by money matters. We were able to mobilize a large number of women who were interested in being economically autonomous and started with 20 members with a capital of 5 million Tanzanian shillings (approx. 2,200USD). We have now amassed to 122 members with a portfolio of over 500 million Tanzanian shillings as of 2018 in circulation as business loans to members. While our constitution recognizes that this association is a women founded and led organization, we have adopted a ‘men engage approach’ since we want them to witness the power and capacity of women leading, and become champion of perception change.

I have kept in close contact with the sisters I met at the AWLI especially using social media whose power we have harnessed to encourage one another and celebrate the gains we have made. I am able to see Hon. Dennitah Ghati, a nominated Member of Parliament 2017 – 2022 in the Kenyan parliament speaking about women with disabilities and give her a boost and she has done the same. I hope that in the future, we shall do more and even collaborate on a number of projects.

I want to live in an Africa where African women own and control assets including land, enterprises and money.

In the next 10-20 years, I want to live in an Africa where African women own and control assets including land, enterprises and money. I want to see them as active business leaders, policy makers and high leaders in high level national and international forums. I want continue mentoring young girls and change the narratives of women. I want to see mindset change to the level where a girls’ marriage is no longer the highest achievement it is today. I want to see women making decisions about their reproductive health, deciding when and how many children they want to have – prioritizing their self-care because no one will ever tell a woman that it is okay for her go to bed, take leave, go out or relax! I want to see African girls and boys destroying the expectations that have been built for women through the negative societal values and gender stereotypes.

Are you an alumna of the African Women’s Leadership Institute? How would you like to document your leadership journey for future generations? Reach out to us at amwa@akinamamawaafrika.org to have your story featured today!

What you learn at the African Women’s Leadership Institute (AWLI), you never learn at any school
The AWLI: Memories of an Invincible Sisterhood Created
The AWLI Gave Me The Freedom and Courage to Pursue a Career That I Was Passionate About