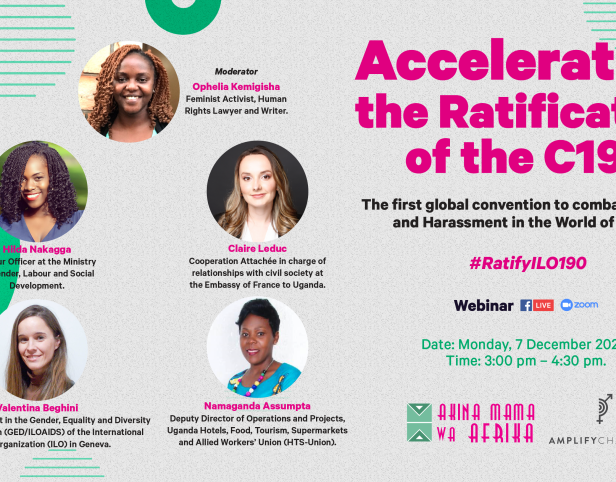 However, only two countries; Uruguay and Fiji have ratified the ILO’s Violence and Harassment Convention since it was adopted.

To raise awareness and mobilize various stakeholders about C190 and the opportunities it presents as a tool for organizing, Akina Mama wa Afrika (AMwA) supported by Amplify Change, hosted host a webinar focusing on “Accelerating the Ratification of the C190”, on December 7, 2020.

The webinar was moderated by Ophelia Kemigisha, a human rights Lawyer and feminist activist currently working with Chapter Four Uganda as a staff attorney. The panelists were Hilda Nakagga, a Labour officer at the Ministry of Gender, Labour and Social Development (Uganda), Clare Leduce, a Cooperate attache in charge of relationships with Civil Society at the French Embassy in Uganda, Namaganda Assumpta, Deputy Director of Operations and Projects at Uganda Hotels, Foods, Tourism and Supermarkets and the Allied Workers’ Union, and Valentina Beghini, a Technical Specialist in the Gender, equality and diversity and ILOAIDS branch of the International Labour Organisation in Geneva.

The speakers highlighted the importance of the ILO Convention C190, particularly in light of the COVID-19 pandemic and the effects it has had especially towards escalating violence in the workplace, .(what are the effects of the pandemic?), the steps being taken by governments towards ratification of the same, how civil society and government can collaborate to speed up the process, and how workers and employers are being involved in the ratification process, here in Uganda.

While sharing her opening, Ms. Eunice Musiime, AMwA’s Executive Director stressed that though several organizations globally have held conversations around the ILO C190, AMwA felt the need to create awareness around the convention as it is not as widely known beyond the circles of those who worked towards its adoption in June 2019.

While giving her remarks about the significance of the Convention, Valentina noted that it is often difficult to draw a line between what constitutes violence or harassment, but, for the first time, a broad definition of violence and harassment was agreed upon by states.

“The Convention recognizes for the first time ever gender roles, and equal gender power relations and this needs to be tackled if we need to end violence and harassment. The convention calls for an inclusive, integrated and gender-responsive approach towards addressing violence,” she noted, adding that, “We all know that if we must tackle violence and harassment, we need to see that all ministries and all the different branches of legislation and regulation have this approach and work towards addressing harassment”.

Sharing about the steps the government of Uganda is taking to ratify the ILO C190, Hilda noted that the Ministry of Justice received clearance in July 2020 and has since started on the roadmap; first of which was holding a stakeholders consultation where stakeholders agreed to have a national steering technical working group to take on the roadmap.  The government of Uganda is also developing a media documentation strategy and planning to undertake regional consultations.

On the other hand, the Worker’s Union according to Assumpta is educating employers and workers about the convention so they can have a full understanding of their rights and how it will apply to them when it is ratified. These trainings she says, are focused mostly on the women since they are most affected by violence in the workplace.

“We presented a petition to parliament during the lockdown and are trying to review the Collective Bargaining Agreement to include sections that protect women against harassment and violence. We are adding these sections as good practice so that when the Convention is ratified, we carry on and perfect it,” she said.

The ILO C190 closes the global regulatory gap on workplace sexual harassment and recognizes that violence and harassment in the world of work can constitute a human rights violation or abuse, is a threat to equal opportunities, and is unacceptable and incompatible with decent work.

AMwA recently published a technical brief titled “All you need to know about ILO Convention 190 and Recommendation 206 on Violence and Harassment in the world of work”. It explains what violence and harassment constitutes in the Convention, how the world of work is explained, Gender-based violence as a workplace issue, and explains the responsibility and obligation of the state towards the convention; just to mention. You can download and read the brief here.