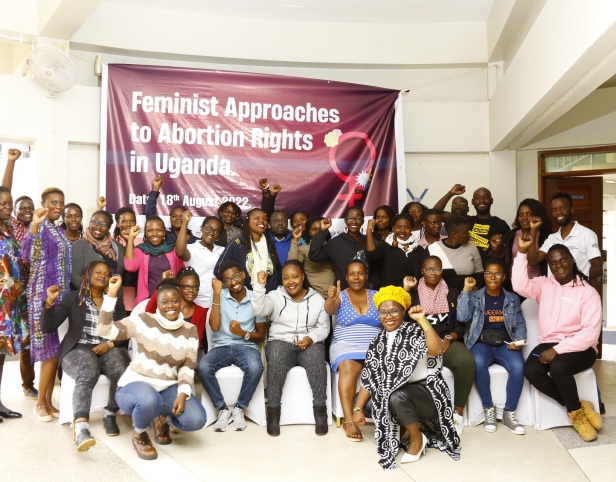 According to Guttmacher Institute’s report in 2017, the abortion rate in Uganda is slightly higher than the estimated rate for the East Africa region, which was 34 per 1,000 women during 2010–2014. In addition, a 2010 report from the Ministry of Health indicated that 8% of maternal deaths were due to unsafe abortions. Likewise, during the public hearing of the East African Community Sexual and Reproductive Health (EACSRH) Bill in Uganda, health practitioners stated that they often receive women and girls, the majority of whom are between the ages of 15-24, at the hospital doorstep on the brink of death due to hemorrhage or sepsis from unsafe abortion.

“Abortion as a right is a principle, and we need to be able to establish that. We might differ on strategies to achieve that right, but we cannot compromise on the principle.” – Eunice Musiime, ED, AMwA.

“To surmount some of the legal barriers around access to safe abortion, we should advocate for safe abortion using health and patient-centred care approach, which can be pushed for as a right.” – Bosire Stellah, a feminist physician and the Co-Executive Director of UHAI EASHRI, Africa’s first indigenous activist fund supporting sexual and gender minorities.

“The truth is that the restrictions around access to safe and legal abortion primarily affect the most marginalized groups, poor, young women and girls because the wealthier people have the resources, networks, and influence to access safe abortion when necessary. – Anonymous Participant

‘It is essential to centre and amplify the voices of the people most affected by these restrictions around access to safe abortion.’ – Human Rights activist Anna Kukundakwe

The conversation further deepened the understanding of the feminist approaches to safe and legal abortion to ensure African women, girls, and gender-expansive persons enjoy their full bodily autonomy and agency. Even with the deeply institutionalised stigma around access to safe abortion in Uganda, it was beautiful to come together and map out pathways we can follow to undo the barriers around this access.

The conversation also set the stage for AMwA’s upcoming release of the technical brief titled feminist approaches to safe and legal abortion in Uganda. The technical brief developed in partnership with the Joint Advocacy Program on SRHR will further contribute to the discourse on feminist analysis and intersectional organising.

We cannot wait to share this. Just watch this space!

You can also listen to AMwA ‘s Twitter space on Access to Safe and Legal Abortion is a Feminist Issue.